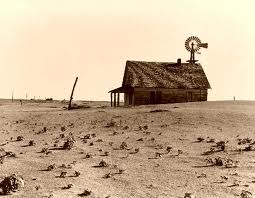 This past weekend I was able to see “The RainMaker” at Balaboa Park’s Old Globe Theater courtesy of some free tickets I acquired from some lovely strangers. This delightful play, which stars a small cast of 6 men and 1 woman, was originally written by N. Richard Nash in the early 1950’s but the 2013 rendition that I saw was directed by Maria Mileaf .

The story is set during the great depression era and revolves around a small town farm family, the Currys, and their particular struggles with the ongoing drought and more instantly their aging daughter Lizzie. Lizzie Curry (Danielle Skraastad) is needing to find a beau and fast as her own self worth as a woman suffers under society’s and her father-brother-and-brothers’ pressure to get hitched. While Lizze knows she is smart, proud, and a great house keeper, she has little confidence in her look s and ability to act feminine. At one point she recalls her only kiss, happening at the age of 12, being the result of a dare in which the young boy proclaimed: “See I’ll even kiss your daddy’s hog.” Needless to say, we watch as Lizzie struggles with her role in the evolving family, her self image, her self worth,  and her dire future as a possible spinster.   In a last attempt to redeem the 27-year-old’s fate the Curry men comically attempts to match-make  her with the town’s only seemingly available bachelor, the “widowed” deputy sheriff File (Tug Coker). An annoyed but cooperative, Lizzie gets her hopes up only to face rejection again.    When things seem like they couldn’t get any worse an eccentric charismatic con-man named Starbuck appears at the family’s door promising he has the answer to their problems; “rain in exchange for $100!” His arrival sets off a series of events which enable Lizzie to see herself in a new light and then some.

The rainmaker explores ageless themes of love, passion, faith and magic. But, an interesting take was that the  role of Starbuck, traditionally by a white actor, was rendered by an African American actor, Gbenga Akinnagbe. Its always controversial with theatrical role reversals as  some have criticized them as lazy ways to bring in more revenue or make a point about something social or political without actually having to touch on the subject.  And something can be said about the complete disregards of the race factor in this play bringing  an extra element of suspense to this American classic for the unsuspecting/unfamiliar audience member. Especially, when it would have most definitely been a high controversial factor in the 1930’s <SPOILER> especially since there were some romantic scenes between Lizzie and Starbuck. Which begs the question why it was done that way? It also seems slightly out of place because its not like the plot does not touch on social issues. For instance, the notion of feminism is a perpetual theme that even director chooses to highlight through the portrayal of Lizzie’s attributes. Maybe I’m just being a pessimist and stickler for historical accuracy but I guess you could argue that the bubblegum old Hollywood feel to it is accurate for when it was originally written.

Nevertheless, this performance still works, and by cleverly bypassing the subject of race and having Lizzie break out of her role into a strong character at the end, the reversal really placed the characters in the story on a more basic human level. It allows the audience to also break out of the stereotypes they may carry and focuses on what seems to be important ongoing message, opening your heart to others while staying faithful to yourself.

Overall, if you haven’t seen it then I recommend you please do.  I’d give it a 6/10. Support the arts! Thank you.

Can you imagine picking up test- tube breed beef off of your grocery shelves Check out the full article  from Fast Company Magazine that has some people holding their lunch back. In my opinion, this is just a tier above pink slim. Utterly gross. But, I’m guessing that they set off on this venture to try and keep up with our over consumption of meat products which is a real problem environmentally as well as financially. However, I don’t believe that this is as of yet the best method to solve the issue as each burger costs about 331000.00 US Dollars to make and takes about 8 weeks. On the flip side of this broiling dilemma this could present itself as an opportunity to possibly lessen the senseless slaughter of so many animals. With meat being manufactured in the lab who would need the traditional farm right?! (great another problem). But I doubt the pushers behind this endeavor had cow rights on the brain. I think that this advancement is another of reflection of just how far our scientific advancements are and the potential for this technology to be used for medical purposes if ever sanctioned. But like every new thing there is a darker reality in how it might be used. Ever see the movie Re-Po Men? What are your thoughts on the matter? Would u throw one of these guys on the grill?