This past August, I was fortunate enough to catch the second premiere (outside of Washington DC) of the documentary “The Legend of ‘Cool Disco Dan’.” This documentary, directed by Joseph Pattisall and  produced by Roger Gastman,  chronicles the evolution of Graffiti subculture in Washington DC’s metropolitan area and the correlative story of one iconic tagger’s influential role, “Cool Disco Dan.”

“Cool Disco Dan” is known for his prolific tagging in the Washington DC ( NOVA area), notably on surfaces along the route of the metro line. His tag has remained consistent, a simple rendition of his pseudo name “Cool Disco Name.” All caps, slightly bubbly lettering, and accompanied with parenthesis; his tagging style can only be described as being true to Go-Go, a popular music and dance, music style, and culture originating in Washington DC in the late 1970’s and 1980’s.

During the 1980’s and early 90’s his tag almost became a household name. For years, his identity had been a fascination of local press who frequently questioned who was “Cool Disco Dan’?” The pervasiveness of his tag also caught the attention of city politicians,  who made Graffiti and Go-Go culture into pariahs with the rise of drugs and gang violence. Still, many viewed Dan as a symbol of survival and normality during DC’s darker days. People from all walks and neighborhoods would recognize and wonder about the man behind the tag. 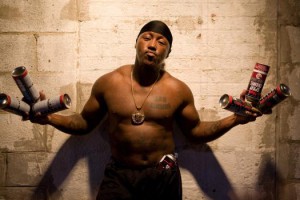 When the mystery  was finally revealed we got to know more. Despite his huge street presence, “Cool Disco Dan” or really Danny Hogg,  was in actuality a quite and reserved individual. He like to keep to himself and was in fact fairly shy.  In the documentary, it’s revealed that Dan’s commitment to tagging began as an activity among friends but soon became a way to  keep out of the drug and gang violence that was a growing problem in his youth. As his world changed, he made tagging a constant in his life. However, just like the city, Dan experienced some darker days working through bouts of mental illness that caused him to at times be estranged from his family and live on the streets. In more recent years, Dan has been featured in the book Free Agents, a history of Washington, DC graffiti, and has a page on “Art Crimes” as a featured artist. A few of his works have also been acquired and exhibited by the Corcoran Gallery of Art.

The showing was paired with a question and answer session from the filmmakers. This documentary to 10 years to complete as the pair worked on it on a touch and go basis. They said that the reason the film wasn’t released earlier was because if was a long term project, it was sometimes difficult to find sources, and they wanted to make sure that they presented Dan in a respectful light.

Lastly, in spirit of the film and Go-Go, it was followed by a fantastic b-boy b-girl  ( break dancing) competition of all ages. While I can get my two-step on these men, women, children really know how to work. Truly, admirable.

Overall, the event was pretty spectacular. My take away is that you never know how art can and will impact others, so if your a creative keep on strutting.

While your at it, check out this trailer and a few clips from the b-boy and girl event 🙂

If you don’t want to read my attempt at a poem that’s okay but please watch this video because; wow. The cinematography is amazing and even inspired me to try something I never do. Hope you enjoy and I also welcome comments!:)

Nature is beautiful.
Nature is awe inspiring.
The miniature life; a small creatures strife.
Whirlwinds and thunder;
How life goes on is its own wonder.
Soft, strong, scary dawn;
Howling, growling, hairy, blonde;
Strands of grass amongst a bare plain.
Structures long gone.
Hidden crevices, tendrils; nemisis
meetings in unlikely places.
Planned and strategized battles and races.
Various kingdoms, donning ecological wisdom;
Checks and balances with no true malice.
Nature will bring you on your knees and then lift you up.
Its justice knowing no faces.
Tender, quiet, silent night.
Like the dew on a leaf it only take one moment to ignite a belief that
there can never be enough;
life.

An attempt at poetry by yours truly- Melissa Brooks

The artist Banksy is doing a month long “residency” in New York City, and posting each piece to a website. Definitely gonna be a favorite site to check out for the month. http://www.banksy.co.uk/.