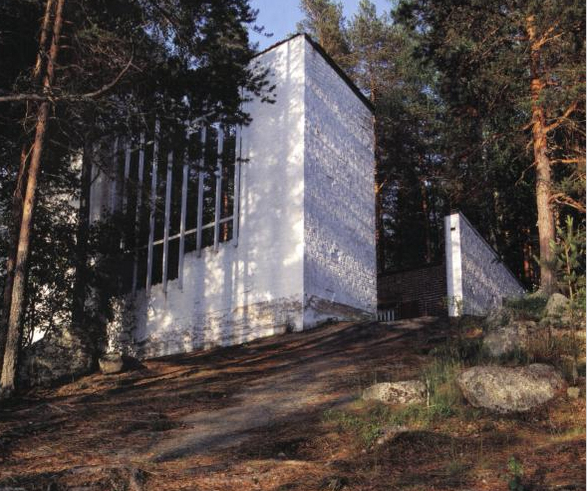 This short text  summarizes the structural, construction, and environmental systems employed in the design of Alvar Aalto’s Muuratsalo Experimental House. The analysis will pay particular attention to the use of brick in the structure as well as its relation to the site relation. It will establish that the Muuratsalo Experimental House was not only a poetic expression of the architect’s interest at the time but served as a serious exploration of alternative building techniques.

The Muuratsalo Experimental House was a personal summer retreat that master architect Alvar Aalto designed from 1952-54. Aalto often drew inspiration for his designs from precedents of Italian Piazzas as well as directly from the landscape. This project was no different, with the scheme being centralized around a large interior courtyard. However, the site bore a particular sentiment as it was a place that he and his new first wife had shared an attachment too. He not only wanted to create a in a place that had meaning, but just as his life was moving in a different direction he wanted to also experiment with his designs. The main experimental areas Aalto focused on in this structure was building without foundations, experimenting with free-form brick construction, free-form column structures, and solar heating.

The Experimental House is situated across from Lake Paijanne on the western shore of the island of Muuratsalo. Measuring 53650 m2, it is a very rocky site with boulders and stones covering the landscape interspersed by bilberry, lingonberry bushes, and a birch and pine tree forest.

It consists primarily of two buildings, a large interior courtyard with a fire pit, and a number of installation walls that sprawl out into the landscape.  In addition, there’s also a woodshed, a smoke sauna, and a boat-house within the grounds. The first building (which is the primary focus of this study) contains the main living quarters as well as a lofted space that served as a gallery. The L-shape of this first building encloses the courtyard to the south and west. The second building serves as a guestroom-wing.

The structure of Muuratsalo can be two in three parts. Starting at the ground plane, Aalto entertains the idea of a foundationless foundation. That is he doesn’t use a traditional cement foundation set in the ground but employs the natural stone found on the site to resist the gravitational forces from the load of the building.   Wanting to build without disturbing the natural landscape, he strategically places ‘free-form column structures’ (load bearing wooden footings)  and load bearing brick in the most advantageous points in the terrain to support the sub-structure of the floor. To clarify, the wooden flooring is being supported by the joists and the joists are being supported by the load bearing wall and the select wooden footings. The result is as certain parts of the terrain slope down or are absent, poche spaces are created underneath the flooring.

The load bearing brick is utilized in thick walls along the perimeter of the structure. It sits flush against the stone and adapts to terrain changes. It compressive strength and modular qualities enabled Aalto to leave voids in the wall, creating notches to house and support the wooden flooring and roof structure. In the living room of the L-shaped building, the roof is inclined and contains a lofted space. Sixteen beams support the roof. Running across the ceiling from north to south, they are slotted into the brick walls at the very incline that roofing follows. The interior of the house also has a lofted area which is cantilevered out and by wooden beams running east to west and is held in tension by supports connected to the beams that also support the roof. 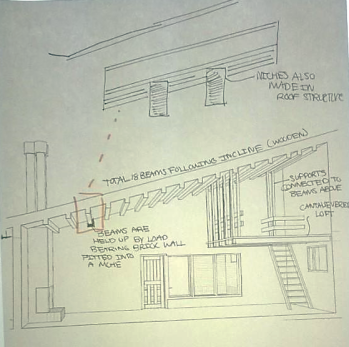 The experimental house was built over the course of two years utilizing brick and wood in what could be considered a passive construction method. Not only was Aalto careful not to disturb the natural landscape,  the majority of the brick used were rejects and were salvaged from another one of Aalto’s projects that was happening nearby, Säynätsalo Town Hall (1949-52). In addition, the brick was initially manufactured locally in Finland.

Essentially, the construction process was also an experimental process.  Aalto wanted to test the aesthetics of different arrangements while also monitoring how they reacted in the rough climate. Although the climatic results are inconclusive, on the walls of the internal courtyard, he was able to test different types of brick pointing, sizes, joints, and the effect of finishes on different surfaces. As a result, the walls became almost mosaic-like with approximately fifty panels of different types of brick.

Brick is noted for its compressive strength, however a large part of its strength is dependent on its bond. Therefore, it can be inferred that in Aalto’s mosaic like courtyard there are varying degrees of strength (PSI) and that the combined patterns may or may as it stable as they appear. 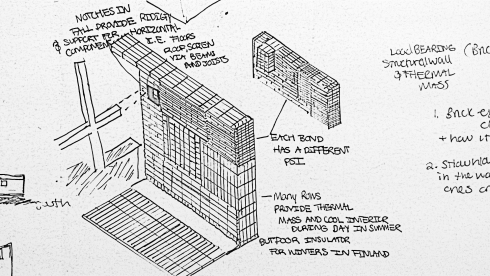 When Aalto constructed the experimental house, the contemporary idea about sustainability was not a consideration. Rather, for Aalto it was more about building systems integration, particularly in regards to detailing and using passive systems to improve human comfort. So in addition to utilizing salvaged materials, he utilizes the courtyard as a climatic device to cool the interior of the structure.  The high walls of the structure created a microclimate by shielding the interior of the courtyard from cooling winds off the water from the north.  Ventilation and lighting was strategically allowed through the screen on the north western elevation and the entrance toward the west. Simultaneously, this allows for solar radiation to warm the space by using the solar heating properties of the brick wall and floor.

The solar absorptivity of a material is mostly dependent on color and density.  In the internal courtyard, the facade treatment of the house changes from white-painted plastered walls to red brick.  The white brick would reflect most of the solar radiation on the exterior while the natural brick in the courtyard would absorb it. Brick having thermal mass properties allowed it to keep the interior cool during the day while slowly releasing it after many hours at night. It is necessary, to note that structure was occupied as a summer home only because solid brick wall (no insulation) and therefore would experience heat loss in the winter months.

There is something to be said about revisiting not only great works but great architects but also their projects that gave birth to them. In regards to the experimental house, the use of materials in the courtyard is obviously the main focal point as the variation in pattern can only elude to the time and meticulous manipulation of the material. However, there is a much deeper environmental/comfort understanding with the implementation of these materials within a courtyard setting. Similarly, the structure of the experimental house looks as if it has a traditional frame (and in some regards it does) but on closer inspection great consideration was placed in the innovative solution for preserving the landscape. Here the architecture becomes one with it.  In all, the experimental house at Muuratsalo provides an interesting artifact of not only Aalto’s own design logic but of how innovations in building systems and technology actually come into being; through trial and error.