Unlike other parts of the San Diego, California’s metropolis, the distinct urban form of the grid  in the Pacific Beach area has been present ever since Spanish imperialist settled the city in the mid-1880’s. The original grid was non-hierarchical but had a dedicated green block in the center. It pushed forth two types of equally sized and spaced rectangular blocks. The dominate type had their lengths spanning east-west. While the second type was oriented to the north and south and only began as it approached the southern geographical edge, the peninsula. Other natural geographical edges are the narrowing of land toward the south by Mission bay, the Pacific Ocean and coastline to the west, a large hill to the north, and a slight incline to the east accompanied by canyons. Along these edges, the grid constricts lending itself to smaller, equidistant but more irregular plots. Drawing parallels to the larger urban context, it is interesting to note that San Diego as a whole has similar edge conditions to Pacific Beach with neighboring city (like Los Angeles) to the north, the Pacific Ocean to the west, Mexico to the south, and the desert and smaller cities to the east .

In contemporary times, the geographical edges remain and the two way grid continues to be the dominant urban form although there are some new configurations toward the northeast portion of the neighborhood. However, the population began to increase dramatically in the 1940’s after WWII and continued to the 1960’s. As the available land space remained the sames, this resulted in the original equidistant, non-hierarchical grid becoming aggregated and densified. So much so that approximately,  97% of the land is used and any new projects are infill.

The new blocks themselves are inconsistently sized rectangular shapes that are oriented in multiple east-west, north-south combinations.  In regards to building form, the masses utilize 20-80% plot use and footprints range from rectangular, square, and courtyard, full enclosure, and L-shape forms

Additionally, with the emergence of the automobile, the paths that make up the grid came to be dominated by two east-west arteries that act as access points to the greater region. Interestingly, these two paths  starts as one and then split . Accompanying the east west paths are four additional access points oriented north-south. These roads only access other neighborhoods. 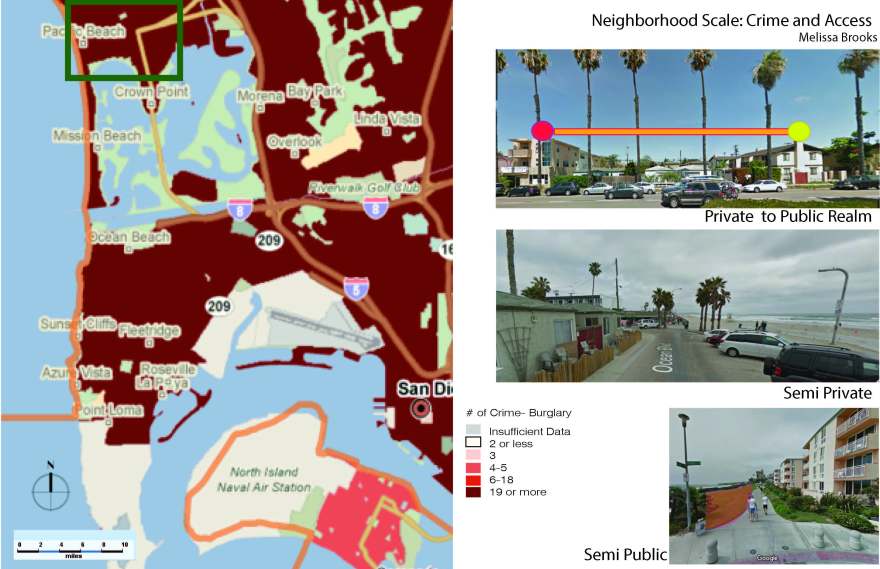 Crime was analyzed from a city scale as well as the streetscape scale. Burglary was highlighted over theft as it is essentially the same act (although burglary is more violent) and both had high number of occurrences. Burglary, in particular,  was measured as having occurred 19 or more times annually in the area.  Identifying that the city as a whole the city has this same rating indicates that the majority of incidents occurring in San Diego happen  indiscriminately.  In the case of Pacific Beach, this result was supported by the many indistinct transitions from public to private  spaces and a lot of semi private-public space.  When the only real distinction is by the architecture it implies that burglars may not target certain housing complexes or destinations but choose whatever targets are closest to means of exit. Considering, if the  social quality  of a place cannot be measured by the quantity of undesirable activities then other measures may provide better indicators.

At the neighborhood scale and subsequent block scale Pacific Beach has very distinct zoning. Most prevalent is the array of residential ( multi-family apartments, condos, single family homes (in shades of blue)) with some mixed use intermingled amongst them (purple).  Then a strong commercial and mixed use corridor (maroon) along the two main east-west access paths as well as along the coast. At a block scale, the range of diversity is best pointed out with statistics regardings the median income per household  and number of non white residents. They reveal that in this area,  a wealthy ($55k-$77k+) predominantly white population occupies the northern/southernmost points and coastline while a more economically ($33k-$54k) and ethnically varied population occupies the east. Interestingly, most rentals and more temporary lodgings relocated in the eastern area are also, in terms of morphological development, the newest.)  A mixture of both groups occur along the commercial corridor.

One thing to indicate is that while the statistics I researched indicates that the area is primarily homogenous in nature. Perceptual experience, rooted in personal experience, dictates that these metrics do not consider the socio-economic characteristics of the daily visitors of the area which is significant to the neighborhood as it has always had tourist type attractions be it the pier, horse racing, or recreational areas. Today, the primary active spaces are the commercial zones and common areas (beach and parks). One indicator that did allude to this is the fact that only 10 % of the residents living there worked in the area where the other 90% commuted to different parts of the metropolitan. This fact, also alludes to a greater vehicular-centric culture in the city.

The block and streetscape reveal most about the quality of the area in regards to  architectural style, walkability, and place-making.

Architecturally, the styles range in both the commercial zones as well as the residential. As mentioned earlier, there is not any real distinction between public and private spaces so a true variety exists often reflecting the age in which the land was acquisitioned. For instance, in one block it would not be uncommon to see a beach bungalow, next to an international style apartments, adjacent to a spanish revival. These structures range from 1-3 story high and vary in upkeep. Commercially, the structures primarily consist of concrete or wood but all tend to have very active frontages with large windows, signages or seating out in front of their store (if they are an eatery). The commercial corridor building rand from 1-2 story high. The commercial building upkeep is okay but noticeably increases in upkeep as it heads west. 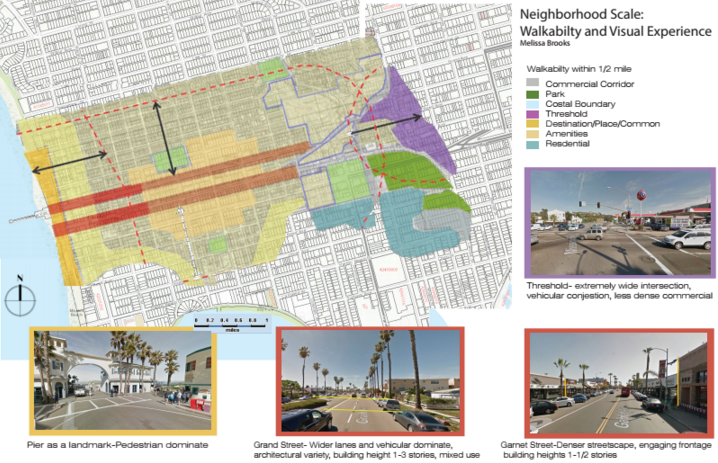 Street parking exist on almost every path as the presence of parking lots are very limited. As such a person walking has a barrier between vehicular traffic and themselves. As this is an older neighborhood there are also trees planted in regular interval. However, the majority of them are palm trees and do not provide as much shading. There are three primary types of paths that exist in within the grid. There are the residential paths that are essentially four lanes in width (two for parking, two for travel). These are typically low in vehicular traffic and higher in bike ridership. The speed limit is 25 to 30. There are the main cardinal arteries. One type it is a mix of commercial and residential structures and typically consists of wide 6 lanes paths (two for parking, four for car travel) with pedestrian crossing only at the end of the block. There is usually a consistent elevation of the structures, however these typically sit back on the lot and there are voids created by the grass in between structures.  The speed limit here it 35.  The other artery has a narrower path (four lanes with two for parking), a more densely consistent elevation, and more frequent pedestrian crossings (with traffic lights). While vehicular traffic is allowed on this road the speed limit is reduced to 30.  What is so interesting about the two arteries that start as one and divide, but maintain the same direction is that they both have these distinctive qualities.

The Pacific Beach neighborhood has a distinct rhythm of threshold, corridor, and shared destination. The procession into the destination is really what characterizes the neighborhood as at the streetscape level it is visually noticeable that there are not only wealthy people living in the area but it is home to many college students, single professionals and families. Visitors, come in all ages and ethnicities can be seen  frequenting the beach area, pier, and recreational spaces.